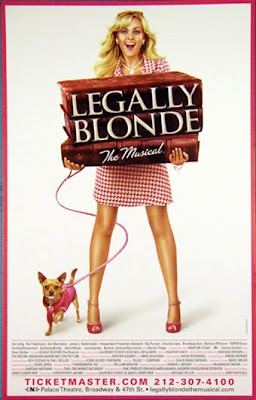 The smash hit show playing on the London stage has just won the ‘Olivier’ award for best musical.

Based on a Reese Witherspoon film, it charts the progress of a cheerleader who hides her intelligence in order to keep her boyfriend. Ironically, he dumps her anyway for another judged to be a more acceptable consort for a future lawyer.
She gets even by winning admission to Harvard Law College, scores again by getting better grades than her erstwhile lover and finally triumphs in the courtroom.

Clichés are usually unhelpful, but the myth of the dumb blonde particularly so.
Some blondes in the cinema were tough and smart broads. Think of Mae West and the wise cracking Lauren Bacall.
My particular favourite was Marilyn Monroe who hid her ambition whilst retaining a winsome charm.
She played dumb blondes well, as in Some Like it Hot. My preferred Marilyn Monroe showcase is Gentlemen Prefer Blondes.

She plays a nightclub entertainer Lorelei Lee, out to bag a rich man and any other trinket along the way.
Her version of ‘Diamonds are a Girl's Best Friend’ has never been bettered.
Near the end of the movie, she with her geeky but rich boyfriend is confronted by the boy's father. He wants to stop his son marrying a gold-digger. Anita Loos who was the author gave Marilyn a great scene.

"You only want to marry my son for his money" says the irate father.
"No" Marilyn replies, "I only want to marry him for your money."
While he splutters, she continues:
"You are silly. Don't you see that a girl who is pretty is like a man being rich?
You won’t marry a girl just because she's pretty, but doesn't it help?
And if you had a daughter, wouldn't you rather she married a man who was rich and able to give her the things that made her happy?"

Score one for the dumb blonde.
Posted by Daz Valladares at 13:03