The manoeuvering of free choice 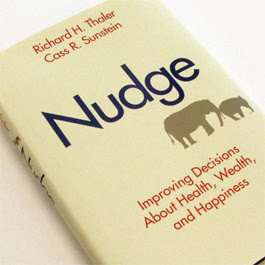 Nudge, a book by Thaler and Sunstein was a hit when first published in 2008, despite some criticism from people who described it as dull. Its theme is that people can be nudged into making the right decision when attempts at persuasion, compulsion or other forms of pressure might fail.

David Cameron was converted to this notion and created a “NUDGE “ team of strategists charged with changing public behaviour without them noticing.

Their latest finding is that legacy income attracted by charities could double if people were reminded of making a charitable bequest when drawing up a will. Most charities actually do so anyway, and the reason legacy income has fallen may have more to do with concerns about future income, drop in savings rates, fear about the cost of long term care and the need to provide help to children and grandchildren onto their first steps up the housing ladder.

Nudge is not a new concept.  Edward De Bono called his theory: Lateral thinking. Indeed its origins go much further back. Kemal Ataturk, the founder of modern Turkey wanted his country to look westwards. He believed that the covering up of women’s faces by the traditional veil was wrong, so tried initially to ban its use. The clergy objected. Ataturk then decreed that all women of ill repute would be compelled by law to cover up their faces. Overnight respectable women abandoned the veil.

Back to charities. The ones that continue to attract donations and legacies are the ones that have a high level of spontaneous awareness, are known for the essential role they play and the public’s belief that this charity makes a difference. Cancer research and the British Heart foundation do well with legacy bequests because everyone knows someone who has died from one of these dread diseases. They also have a large base of supporters. According to the Target Group Index, Cancer research has 15 million supporters.

It follows that this generates a large mailing list, so they have plenty of opportunities to ask donors to remember them when it comes to making a will. Charities spend 65% of their advertising budget on direct mail.

But what can the smaller, less well-known charities do?

The answer is to get known, for the cause and your contribution to alleviating the situation. Advertising investment by charities in 2012 was nearly £ 400 million. Find some rich trustee to provide the money. Raid your reserves. Hold events. Ask advertising experts to help. Develop a clear objective that can be evaluated. If it is to raise money, ask yourself if this is compatible with building positive awareness and creating a larger donor base.

Two charities that attract legacies are The RNLI and the Guide Dogs for the Blind. Research I have seen suggests that potential donors are giving money for the brave life boat men rather than the hapless sailors in trouble and for the beautiful dogs rather than the blind person. It is important to understand what the emotional triggers are.

More than that, find someone to advise you. Someone who cares.