The Lion and the Hyenas 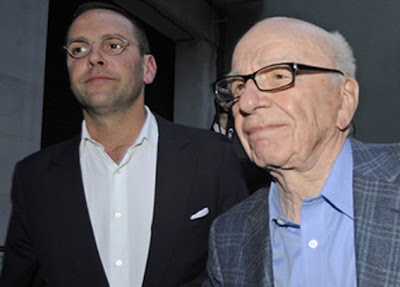 As a child I remembered being moved by a story of an old and sick lion being attacked by a pack of hyenas.
The lion was noble and the hyenas cowardly in the simplistic and empathetic way a child sees things.
This analogy comes to mind in the spectacle of Rupert Murdoch at bay.

Mr. Murdoch is however not a noble lion and as a man subject to the adverse effects of power. Unlike Caesar, he did not have a man riding in his chariot repeating the mantra: "Remember, you are only a man."
His victories were noteworthy. He easily bested Robert Maxwell, outmaneuvered the print unions and was given an own goal by the people who launched the British Satellite Broadcasting company. You know, the people who gave us the squarial.

Rupert Murdoch's early opponents under estimated him. They described him as an Aussie upstart. That was a huge mistake. David Frost, fresh from his successes with shows on London Weekend Television, demolished Dr. Emil Savundra, an arrogant bombast who had owned and bankrupted a motor insurance business. His next victim was to be the young Murdoch on what I remember may have been on live TV. Frost failed to dent Murdoch’s composure and resorted to badgering his subject. Murdoch's revenge was to acquire a significant stake in London Weekend Television from which platform Frost was excluded until suitable reparation was made.

Mr Murdoch is a good listener. His people organised meetings over one week during breakfast, lunch and dinner with people with ideas and opinions from the Advertising Agencies. He asked relevant questions and we were happy to tell him our thoughts. Mr Maxwell had the same notion, but talked all the way through the meetings.

Murdoch has had some luck, and survived mistakes such as My Space. Overall he has been the most successful media baron ever.

Only a fool will write him off and he is still capable of striking out.
Posted by Daz Valladares at 16:10

Mr Murdoch is a clever businessman - he produced products the punters liked and so did advertisers - with some reluctance I may add as to content. A supreme marketeer. However, and here is the however, is he in the newspaper business or the smut business. The average reading age of the Sun or the NOW is 7. That it should go after so many years is manifestly a calculated business decision Will his organisation bounce back from this hacking scandal = we shall see. It only seems fair that after all the scrutiney. that his papers have put others under that he in turn is looked at in terms of his organisations practices. We all know that sex and Diana or nowadays Kate sells papers - but is the means justified by the end. Mary Kelly

Mr Murdoch is a thug in a business world - for him to say that 'this is the humblest day of my life' is only that he and his organisation have been found to do dirty dealings. He was a smart businessman and profit orientated - not a newspaper man.